In 1877, an innovation to constabulary duties in an Illinois city annoyed light sleepers and probably brought rejoicing to night-time marauders. Watchmen in the thriving city of Cairo were then required to strike three resounding blows on lamp posts at intervals of ten minutes during the hours of darkness. The Cairo Bulletin was not impressed by the order as furthering the interests of public safety, for it observed that thieves would be made aware of policemen's whereabouts, and "arrests will be less frequent." Apprehensive residents, it is said, found two questionable advantages in the custom. It gave them assurance that officers were active in their pursuit of law and order, and it kept the citizenry in a state of semi-wakefulness. In time, the practice was discontinued.

Extracted 19 Oct 2019 by Norma Hass from Stories from Illinois History, compiled by the Workers of the Writers' Program of the Work Projects Administration in the State of Illinois, published in 1940, page 57. 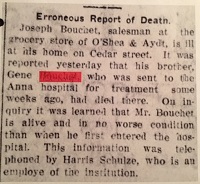 Joseph Bouchet, salesman at the grocery store of O’Shea & Aydt, is ill at his home on Cedar Street. It was reported yesterday that his brother, Gene Bouchet, who was sent to the Anna hospital for treatment some weeks ago, had died there. On inquiry it was learned that Mr. Bouchet is alive and in no worse condition than when he first entered the hospital. This information was telephoned by Harris Schulze, who is an employe (sic) of the institution.