These are pictures and a brief history of Immanuel Lutheran Church on Douglas Street in Cairo. Services of this congregation were originally in German only, then both English and German for a period of time before the German service was dropped. One of the early founders of this church was Andrew Lohr of the Lohr Bottling Company (later Coca Cola Bottling).

This picture of the sanctuary was probably taken in the 1940s.

Beautifully hand-carved altar is original to the church.

Stained glass window at the back of the sanctuary.

The sanctuary had undergone renovations in the 1960s with new pews dedicated to Frederick Foster Stenzel by Mr. and Mrs. Lee Stenzel. New carpeting was added as well as new light fixtures and paint.

History of The Lutheran Church

The Immanuel Lutheran Church of Cairo, Illinois, was organized October 15, 1866, by Mr. Andrew Lohr, Christian Schultz, Peter Chul, Robert Briback, Henry Harris, Gustava Beland, Henry Miesner, Fredreck and Henry Whitcamp. Under the able lay-leadership of Mr. and Mrs. Andrew Lohr, who with their infant daughter, had moved to Cairo in 1857, thay labored untiringly among the German population who had come to settle her from the East, to establish a church home. Today Mrs. Hermine Schultz is still with us, the only living member of that first pioneer group.

For the first five years, services were held at the Rough and Ready Fire Station on Seventh street, where the first pastor, the Rev. J. Dunsing, labored until 1869. He confirmed the first confirmation class, composed of Harris Schultz, Julian Serbian and Anna Sticher, on Palm Sunday, April 14, 1869.

Rev. G. P. Heilbig followed in 1870, during which time a frame building on Douglas street was procured. In 1873 the Rev. C. Duerschner became pastor, and under his leadership the building was raised and a brick foundation laid.

Rev. E. Knappe, the next pastor, served from 1879 to November, 1881. He was followed by the Rev. Carl Schuart, who served until his death on August 4, 1885. He was buried at Villa Ridge. A memorial plaque now hangs in the rear of the church, testifying to his service.

A new era was now dawning on the horizon of the church when, in order to keep pace with the other churches of the city, the German language had to give way to English speaking generations that were to follow and constitute the congregation of tomorrow.

Rev. H. C. Grossman, called January 1, 1894, became its first English pastor and labored until Novmeber 15, 1895, during which time the congregation united with the Southern Illinois Synod.

Then came Rev. W. C. Seidel, who served until July 1, 1896. During an eight-months vacancy which followed, the present brick building was constructed, and dedicated to the glory of God on May 9, 1897, by Rev. J. G. M. Hurst, who also became its next pastor. The windows are all memorials and are gems of art, cast in cathedral glass, with Scriptural emblems suggestive of worship.

A handsome ten-foot altar, designed and carved out of solid oak by Mr. Eichoff, with a painting of Christ by Cairo's own artist, Henry Meyer, hangs above the table. Two years later Mr. and Mrs. Andrew Lohr presented the congregation with a Primary Room joined to the rear of the church.

In August, 1904, the Rec. C. H. Armstrong became pastor and served until October, 1909, giving way to the longest term pastorate in the history of the church. The Rev. C. Robert Dunlap became pastor in October, 1911, and served until July, 1939, when forced to relinquish his work due to failing health. Pastor for 27 years in Cairo, Dr. Dunlap became established in the hearts of all who knew him, and during those years became a leader in the civic life of the community.

During his pastorate a new parsonage was build at a cost of $4,800.00, a new pipe organ installed, chancel furnishings supplied, a vested choir organized, and the Cairo Trust Property on Washington Avenue purchased. It is one of the finest spots in the city and the center of Lutheran life today, used by all the societies of our church.

Rev. C. A. Jacobi, the present pastor, came to Cairo September 15, 1939, and has labored hard to develop one of the finest congregations in the city. The Brotherhood, the Ladies' Aid and Luther-Anns have all shown a substantial gain, with the birth of two new organizations, the Missionary society and the Luther League. Our Sunday School has grown to a new all-time high of 147 souls. In 1940 the whole interior of the church was renovated at a cost of $4,700.00, making it one of the most beautiful churches in the city. It is decorated in blended shades of Nu-Wood, the floor is inlaid with oak block design, carpeted through the aisle and chancel in rich Dubonne. Chimes were added to the organ, fluorescent and semi-lighting installed, and a pulpit erected. A basement has been placed under the church, fully equipped in the latest pattern of primary education, all this heated by a new air-conditioning plant.

Just recently the property next to the church has been purchased, and plans are in the offing for expansion in the ever growing development of a greater church. Our present membership numbers 397.

This history was prepared for a dedication service in 1941.

Frances Bouchet McGee, May 1942.
My Grandmother had a beautiful voice and sang most of her life in the choir at Immanuel. She sang at weddings and services throughout the area. This picture was taken when she sang at the wedding of Harold and Mary Weber in Tamms, Illinois.

These were some pictures my Grandmother had collected from the 1920s.

This is a confirmation class at Immanuel Lutheran about 1910.

The names written on the back are my Grandmother’s recollection of the class members.

Contributed 12 Aug 2019, by Deborah McGee Cox, as a part of the McGee Collection. 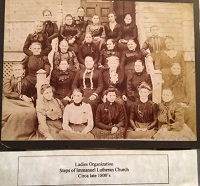 This picture was taken on the steps of Immanuel Lutheran Church on Douglas Street in Cairo. Immanuel was still a German-speaking congregation at the time. 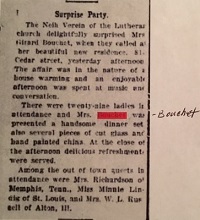 The Neih Verein of the Lutheran church delightfully surprised Mrs. Girard Bouchet, when they called at her beautiful new residence, 813 Cedar Street, yesterday afternoon. The affair was in the nature of a house warming and an enjoyable afternoon was spent at music and conversation.

There were twenty-nine ladies in attendance and Mrs. Bouchet was presented a handsome dinner set also several pieces of cut glass and hand painted china. At the close of the afternoon delicious refreshments were served.

Among the out of town guests in attendance were Mrs. Richardson of Memphis, Tenn., Miss Minnie Lindig of St. Louis, and Mrs. W. L. Russell of Alton, Ill.

Contributed 14 Nov 2019 by Deborah McGee Cox. Frances Bouchet is my grandmother. The year was 1915. This home stayed in the family until Frances Bouchet’s death in 1996. 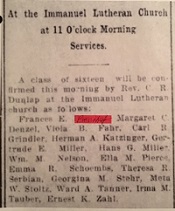 At the Immanuel Lutheran Church at 11 o’clock Morning Services.

Contributed 14 Nov 2019 by Deborah McGee Cox. Frances Bouchet is my grandmother. Although the article does not contain a date, the year of her confirmation was 1916.