FRANCIS VINCENT, Cairo, Ill., and one of the pioneers of the Cairo peninsula, is a native of Southern France, and was born June 4, 1814. His father, Andrew Vincent, was born about 1763, and during his life engaged in farming pursuits, with the exception of the time spent in military service, being a volunteer in the French revolution of 1789. He died in France at the age of eighty-two years. The mother of Francis Vincent, whose maiden name was Louisa Bertram, died when he was but three years old. He was educated in France, and at the age of sixteen went to Paris, and there learned the trade of baker. In 1836, he set sail for the United States, coming by way of New York. His aim was to reach the city of Louisville, Ky., but before reaching that point his means were exhausted, he was accommodated by a fellow-traveler to a small loan, with which to complete the trip. Arriving at Louisville, he had a solitary 5 cents with which he procured a shave and started in pursuit of work. This was finally secured on a snag boat that was about to start on an extended trip from that point to the mouth of the Red River. By this means he obtained a start in the new world, and since that time has never lacked employment. He next obtained work on a steam boat, and soon after, in connection with a German, fitted up a store boat at Paducah, Ky., and started on a mercantile trip down the river; this partner abandoned him at Vicksburg, but he continued the trip to New Orleans, returning to Vicksburg where he established a grocery store, remaining until the spring of 1845. He next went to Yazoo City where he was for twelve years engaged in mercantile pursuits. In the month of April, 1848, he returned to his native country, where, in February, 1849, he married Miss Virginia Veirum [*see note below], who was born in France in 1830. They came to Cairo, Ill., for permanent residence in 1857, and have taken an active part in the interests of the city ever since. While in the main he has been very successful, he has met with some severe financial losses from fire and other sources. They own the property fronting on Eighth street, between Commercial avenue and Old Railroad street, which they have improved. He also built the residence owned by James Reardon at a cost of $10,000, and his present family residence on Ninth street, between Washington and Commercial avenues. Their family consists of Henry E., Louisa A., Meiraban, and Tillie E. Vincent. Mr. Vincent is now engaged in wholesale and retail trade in lime and cements, located on Eighth street. He has been a member of the Masonic fraternity since 1848. 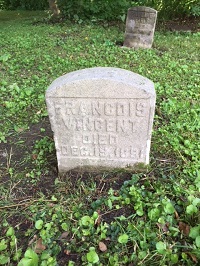 *NOTE: I found an error when reading this bio. Miss Virginia Veirun was my 3rd great aunt. The French spelling was Veyrun, but it shifted over time in America. In the article, the spelling is “veirum.” That should actually be an “n” on the end of the name.

I have been to St. Victor De Malcap to visit the French family still living there. Francois Vincent’s descendants live in Marseilles, France. In 2000 I took my father to France to see the Normandy beaches and cemetery there. We then traveled to the south of France where the family came from and the descendants live. I returned again in 2016 and enjoyed a visit with them again. It has been an amazing experience after 150 years to reconnect with my French roots.